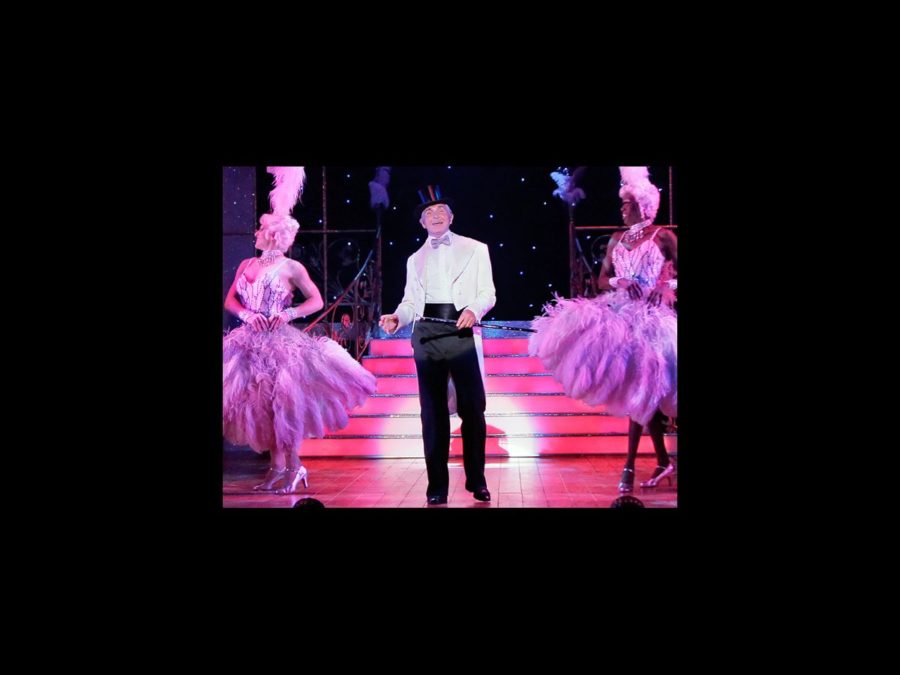 
“I’m verging on the looks of Howard Hughes,” George Hamilton laments of his famous tan, which has endured throughout his five decades in show business. The screen icon isn’t seeing much sun these days, as he’s living a disciplined life when not on stage starring as Georges in the national tour of La Cage aux Folles. After playing roles that have ranged from lovers (The Light in the Piazza) to Dracula (Love at First Bite) to two versions of Zorro (Zorro, The Gay Blade), Hamilton is taking on his biggest challenge: singing and dancing opposite two-time Tony nominee Christopher Sieber in the Tony-winning revival. The popular star chatted with Broadway.com about keeping up with his young castmates, surviving the old Hollywood studio system and the possibility of riding again as Zorro.

How are you adapting to life as a nightclub owner in La Cage?
It’s a challenging role for me. In many ways, I’m envious of Chris Sieber playing Zaza because Albin is such a fabulous, flamboyant character. It’s seductive to want to be the farceur. Chris is so good in this: He gets bored with doing the usual, so he will change things around [in a scene]. My job is to be organically anchored to this—I’ve got to direct traffic through this whole story. I’m torn between my son and Albin. If I’ve done my job correctly, the piece takes on a profundity that’s got to be there.

How is Christopher Sieber as an on-stage husband?
He’s the on-stage wife; I’m the on-stage husband. Every night, I bow to him. I think he’s terrific, and I love working with him. We became fast friends. He’s played both roles [having done Georges on Broadway opposite Harvey Fierstein as Albin]. Initially, I would hear him say things and I’d wonder, “What is he mumbling?” But then I’d realize he was giving me my lines [laughs].

How are you holding up with the eight-show-a-week schedule? Did hearing about Jeffrey Tambor’s abrupt departure from the Broadway production make you think twice about taking on the role?
I only heard about Jeffrey after I had taken it. I’ve never actually heard the clear story. I heard he had hip replacement surgery pretty close to the show. But I had a knee replacement, so I’ll match his hip with my knee. I didn’t really realize how difficult this is. Not only is it daunting in the amount of time you’re on stage, but also with all you have to do.

What's it like to be surrounded by this youthful ensemble of dancers?
We’ve got some of the most wonderful dancing! These athletes are unbelievable. They are just incredibly kind and respectful to me—and protective. I love 'em. Initially, [the ensemble and I] stayed at separate hotels, because I have places that I like in every city that I’ve been before. In the first couple weeks, one of the Cagelles had a nine-inch cut right to the bone in his foot, and he was back in the show a week later. Another one pulled his hamstring and was out for about two weeks. So I thought, I’m in the middle of people who can really take punishment and go back in [to the show]; it would be best for myself to stay close to the theater. So I’ve kind of moved to wherever they go. I don’t want to be too far of a walk away.

You’ve had a career spanning more than five decades, and you’ve worked in all mediums. What’s your secret?
I can’t say that I started out wanting to be an actor. My father once said something that I never got until years later: “Do what you want in life. Do what’s easiest for you, then work at it harder than anybody.” I thought, “What does that really mean?” I was the school clown. I was able to make people laugh at things that others took seriously. The first play I did at school, I did just to get out of a math class. I was playing a young Russian student at Harvard. Well, I forgot my lines within two minutes, so I started pretending to speak Russian. Before I knew it, the audience was laughing and I got a standing ovation before the play was over.

We spoke with Sieber in rehearsals and he gushed about all the stories you have, from working at MGM to spending time with Cary Grant and Judy Garland. What are some of your memories of those two legends?
[Talent] was just so born in Judy, there was no choice of how she had to do things. She had it. She was not a great beauty, but she was a great talent. One night at the Coconut Grove, I saw Liza [Minnelli, Garland’s daughter] get on the stage with Judy and they sang “Itsy Bitsy Teeny Weeny Yellow Polka Dot Bikini.” I saw how tortured Judy’s life was. How after all the success, she was not happy. She didn’t look well. She was a very lonely person in a world where many actors are adored for what they do, but they don’t have any life once they’ve done it.

What do you remember about Cary Grant?
I remember I went to see a house that I was going to buy; it was formerly Cary’s house. A phone call came and it was Cary. He said, [imitating Grant] “What are you doing?” I said, “I’m thinking of buying the house.” He said, “Why would you want to buy that house?” I said, “Well, it’s beautiful.” He said, “It’s not so beautiful. I’ve lived in it. Really, you wouldn’t like it.” I said, “Cary, I just came to see it. How did you know I was here?” He said, “I make it my business to know who buys what I have.”

Sounds like he was pretty mysterious.
From the very first time I met him, Cary was a very interesting man to talk to. But you didn’t know who Cary Grant really was, and he didn’t know who Cary Grant was. That was the interesting part of Cary: He created a Cary Grant that everyone wanted to be. He started taking LSD. He took more of it than anybody. He searched the depths of his soul to find out who he was. I think Cary was becoming a much happier man toward the end of his life. In those days, [the studio] would take someone and build them into somebody they weren’t. Somewhere along the line, you either went out living the character you’d created or you tried to find out who you really were and where that had gone.

Do you feel you got caught up in the studio machine the way you say Garland and Grant did?
It wasn’t much different for me. I came in at the end of that era. The studio said to me, “We want you to go in this direction.” I thought, “This is great—wear an ascot, drive a Rolls, have some money in my pocket and date all the girls at the studio; this sounds good to me.”

You’re an icon for what it means to be classy and debonair. What’s the key to being this way?
Cary said to me, “It’s all about the shoulders of your suit. If they’re not made right, the rest doesn’t matter.”

Nostalgia is really big box office money these days. Would you consider playing Zorro again from Zorro, The Gay Blade?
I think I’d probably do Love at First Bite before I do Zorro. I love the character in Love at First Bite. He’s this old man who’s a great gentleman, but he just has this one problem: He’s been in love with one woman for 800 years. He’s the most faithful man on Earth. He has one little need of blood. Otherwise, he’s just an incredibly wonderful man. He’s not of this era. I felt very comfortable playing that. Without the tan, I might add!